(MISSISSAUGA, ONT.)—Subaru Canada, Inc. (SCI) unveiled a new logo at the 2018 Canadian International AutoShow (CIAS) in Toronto to commemorate 40 years of Subaru sales in Canada. As part of its anniversary celebration, Subaru also announced that its newest — and largest — vehicle, the 2019 Ascent three-row SUV, will start at $35,995 when it goes on sale this summer. 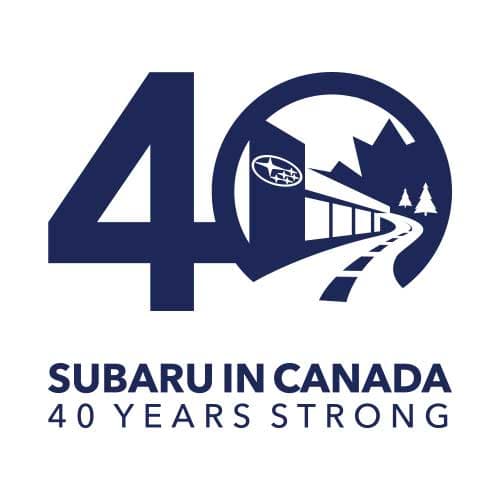 Subaru vehicles were first introduced to the Canadian market through Subaru Auto Canada Limited in 1978, with seven dealerships — all of which are still selling Subaru vehicles to this day. Four decades later, Subaru’s network of authorized dealers has grown to 93 strong across Canada, helping achieve record sales growth. In 2017, the automaker sold 54,570 vehicles for its sixth-consecutive annual sales record.

“For 40 years, Subaru has been delivering safe, reliable, versatile and fun-to-drive vehicles to countless Canadians,” said Yasushi Enami, chairman, president and CEO of Subaru Canada, Inc. “This isn’t just a celebration of 40 years for Subaru in Canada, but a celebration of all the customers that have helped to get us here.”

As part of the 40th anniversary celebration, the Subaru display at the 2018 CIAS includes a classic 1969 Subaru 360. One of the company’s first automobiles, the 360 was the first Subaru sold in North America.

Joining the nod to Subaru’s past at the auto show is a trio of feature vehicles that provide a glimpse at the automaker’s present and future. Making its Canadian debut in Toronto, the 2018 WRX STI Type RA is a track-tuned, limited-edition model based on the WRX STI that broke the outright lap record for sedans at the famed Nürburgring.

Limited to just 75 units in Canada, the Type RA, which stands for ‘Record Attempt,’ is more than just a run-of-the-mill special edition, and includes components intent on enhancing the performance of the already-impressive WRX STI. From increased horsepower, to exclusive Bilstein dampers and coil springs, and a carbon fibre roof and rear spoiler, the WRX STI Type RA is the pinnacle of performance.

Not to be outdone is the 2018 BRZ tS, another limited-edition model that enhances the performance of the car on which it’s based. Limited to just 100 units Canada-wide, the tS — short for “tuned by STI” — is aimed at improving the driving dynamics of the already-responsive BRZ by adding a variety of components, including STI-tuned front and rear SACHS dampers and coil springs, flexible V-bars in the engine compartment, and new draw stiffeners to the chassis.

Finally, the all-new 2019 Ascent makes a bold statement on the auto show floors thanks to its imposing size and attractive design. The largest Subaru ever built, the much-anticipated three-row SUV is designed with active families in mind, and is built to take them where they want to go and beyond. Featuring seating for up to eight people and standard equipment including Subaru’s renowned symmetrical full-time all-wheel drive system and EyeSight advanced preventative safety suite, the 2019 Ascent combines the versatility, capability and safety Subaru vehicles are known for in a family-sized package.

Just like the rest of the Subaru lineup, the all-new Ascent is big on value. Beyond features like standard all-wheel drive and EyeSight, all Ascent models include equipment like alloy wheels, Android Auto and Apple CarPlay, heated seats and three-zone automatic climate control, representing incredible value in the segment. Starting at $35,995, the all-new Ascent is priced comparably to many of its front-wheel drive competitors.

Joining those feature vehicles is the entire Subaru lineup, including the award-winning 2018 Impreza, Crosstrek, Outback and WRX/WRX STI, which were recently announced as ALG 2018 Residual Value Award Winners in their respective segments for best retained value. Subaru was also named the Best Mainstream Brand yet again in the 2018 ALG Canadian Residual Value Awards, the fourth consecutive year it has earned the honour. No other brand has achieved such an honour in the history of the Canadian awards.